Split - How does the RFID fob work

The fobs do not emit a very strong signal

Do they actually emit any signal at all - aren't they passive?

I think the classic RFID used the EMI radiated from the reader to power the RFID tag, which then emits its own signal back to the receiver.

So, although the tag itself does not have an internal power supply, it grabs energy from the environment, (the reader's emissions), for powering its circuitry and its reply.

So, I guess one has to look carefully at their definition of passive to answer your question.

Note, however, that RFID now includes powered tags, which can transmit their signal many meters in distance.

This version would clearly be considered an active device, by any definition.

AIUI, "classic" RFID works on "near-field" principles - which is more like inductive coupling than radiation in any direction?

As it was explained to me many moons ago the antenna coil in the card/fob generates a current when it is placed in the field that is emanating from the reader.  This current powers teh chip in teh fob/card which then sends the PIN thats embedded in the device...be it pre coded at the factory, or by an enrollment device.

So yes Andy you are correct as is Doc.

As I understand it... the card or fob is energised by the field of the reader when in range. In turn the card/fob switches its own coil in and out of a tuned circuit which loads the reader's own coil thereby modulating the reader's circuitry. A demodulator extracts the data.

Effectively the magnetic coupling of the reader and fob coils form a transformer.As Ross mentions, the fob modulates the load on it's coil which is reflected on the reader's coil. If you look at the signal on a scope you see the amplitude modulation. For Hitag, the modulation is manchester encoded.

In turn the card/fob switches its own coil in and out of a tuned circuit which loads the reader's own coil thereby modulating the reader's circuitry.

The smart students at Cornell built RFID systems from scratch.  I learned a lot of background from looking over the projects.

What is discussed above is actually THREE separate things.

RFID tags, including the implantable ones used for pet id, are passive. These are rarely "fobs" but are attached  to things. They get their power from the interrogating signal. For the pet trackers, the interrogating signal is low frequency (some hundreds of KHz, max) and requires VERY close proximity (typically under 10cm) and coupling is magnetic (eg, the interrogator has one half of a transformer and the device forms the other half).  The tag returns a fairly long number. This is the first type and it is not called a "fob" (except when they are in the form that jgm shows).

The second is also passive, but is used in warehouses, retail establishments, and such. The interrogator works on UHF (typically  860MHz or 915MHz). The tag still gets it power from the interrogator and it, similarly, returns a fairly long ID number. This, likewise, is NOT called a "fob".

The third is what we normally call a "fob". It is used to unlock or open car doors, garage doors, and such. The fob has an actual transmitter, typically in a special band around 300MHz (at least in the U.S.). A long pass-code is transmitted and the receiving device responds if the received code matches what was previously programmed into it.

There is a fourth device, called "near-field communicator". It is commonly used between equipped smart phones and vending machines, mostly in Europe. Range is typically a meter or so, and, as far as I understand, both partners in such transactions are active. The name "fob" is not used with this system.

Jim who worked in the UHF RFID industry.

These are rarely "fobs" but are attached to things.

I guess "rarely" is in the eye of the beholder.  We have a line of controllers where operator login (for tracking and somewhat security) is done with "tags".  The form requested by customers is roughly split evenly between "clamshell cards" and "fobs". 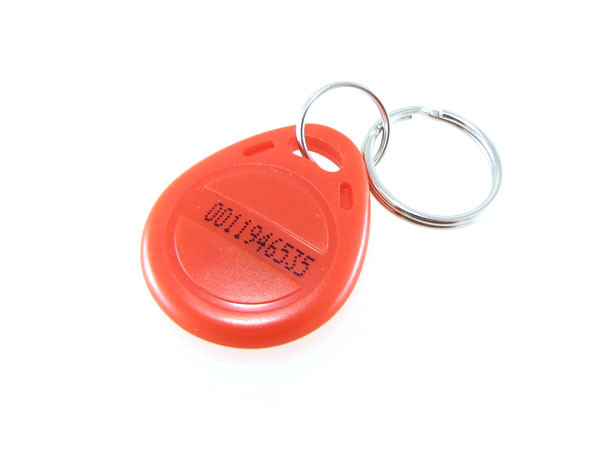 The cards are often/usually used on a lanyard like a fob, but of course could be tucked away in pocket or wallet: 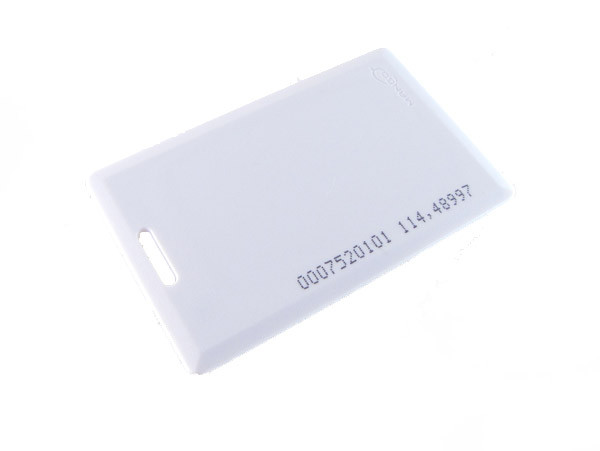 jgm and I had a lively discussion a while ago about these cheap tags/fobs/cards being "legit" and "quality".

IIRC Torby might have used the nail type in a railroad layout.

One discussion I was thinking of: https://www.avrfreaks.net/forum/r...

My car's keyless access system uses 125khz RFID and is also called a keyfob, at least by the manufacturer.

There is a fourth device,

Out of interest, which of the 4 is in this: 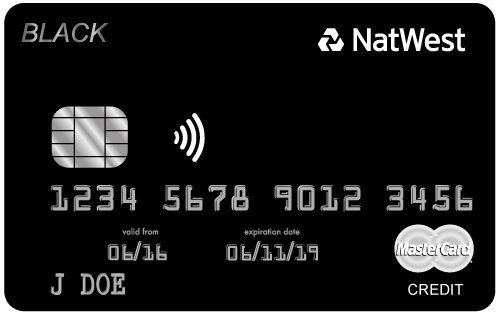 I mean this bit (or, rather what it represents):

Swipe-less credit cards are using NFC (near-field communication). Pretty sure they're using 13.56 Mhz so that they are compatible to smartphone NFC.

My understanding on the swipe-less cards is the same. They appear to get their power from the interrogator, inductively, like the fobs shown above. Had never seen that type until this thread, the only ones I had previously seen were the pet-track ID capsules.

they are compatible to smartphone NFC.

With a suitable app on the phone/tablet, it will "read" a contactless payment card.

(it might not even need an app - try just enabling the NFC, and then put your contactless card near...)

NFC is ISO18000, which is fundamentally compatible with ISO14443 (e.g. Mifare, Desfire, London Oyster card, etc). These have encryption and storage. As does the other 13.56MHz standard called ISO15693, which is used by iClass and others. The 125KHz systems are non secured and transmit in the raw (ask, fsk, or psk are all used in varying bit lengths). I think the livestock tags might be 134kHz - similar to the 125KHz stuff. If anyone wants to know more I design RFID systems but I only know the hardware/RF side of things - not strong on the software side at all. Just ask...
Murdo.

I think EM4xxx is one of the simpler ASK 125KHz systems. They are very easy to copy or emulate - every 8us you send one of a string of bits to represent the ones and zeros. Not sure if EM use Manchester but most of the 125KHz I deal with do use it.
Murdo

awneil,
Technically they do emit a signal - they modulate the carrier, with a back scatter, which leads to side bands at the relevant frequency. Its just that they (ignoring the uhf tags here!) are powered by the reader device.
Murdo.

Hmm, there are TWO kinds of wireless cards that I know of.

Some access-control systems (eg, for buildings) have an interrogator that you hold the card up to, usually quite close. I suspect that these are LOW frequency (125KHz, more or less).

The card like Cliff posted uses a 13-odd MHz system.

The UHF "fobs" used for car doors, garage doors, and such, are straight out transmitters that run near 310MHz in the US. They are battery powered and you DO have to change the batteries periodically. I have a couple, right now, that are waiting for new batteries.

There is a wireless anti-theft system that is used for retail goods and often in libraries. The really cheap one (retail) is built into the packaging and can be deactivated with a magnetic field. The more expensive one (libraries) is, I have been told, more like the pet tags. Both of these appear to be passive low frequency and require walking through something equivalent to a big transformer primary. There are also some, which I do not know how they work, that are fairly large and used on apparel; the clerk has to put it into a machine that detaches it from the item. These also appear to be passive low-frequency devices.

The kind I worked with are the UHF passive tags. These work on the fact that an antenna will re-radiate a signal that impinges on it. The incoming field generates a current in the antenna and the current causes a new signal to be radiated. By modulating the feed-point impedance of the antenna, you can control the strength of the re-radiated signal (which, of course adds sidebands). The interrogator looks for the sidebands because all this has to happen precisely WHILE the transmitter is transmitting and the sidebands are the only part that is at a different frequency; the transmitter in the interrogator swamps anything else (eg, the tag) on the same frequency.

Update after last night:  After the Packers ended their four-game losing streak, they find themselves two games behind the final wildcard spot in the NFC.  They will have a better chance of making the playoffs as the division champion by overtaking the fading Vikings, and play the division-leading Lions in the last game of the regular season.