but I see strange on the spectrum ( no picture ) make test in the customer lab.

Testing to send only one carrier to control SW value and each frequency are rigth.

I get Carrier F1 & carrier F2 ( with another value some KHz difference) and a lot of harmonique.

Is it a way to reduce harmonique with SW ? ( I write it because see at if you do not synchro the frequency change you make a lot of noise)

I guess the harmonique is because my carrier is square and the customer has no filter on the RF power stage .

Customer has a USB  digital spectrum analyser. I have not a spectrum som work i the frequency.

Thank you for a teori update on FSK.

You need to filter the signal. To do this you would normally have a parallel tuned circuit.
If you expect two nice peaks, then you need sinewaves. Filtering will help you achieve that.

You can easily use DDS to get FSK. If you use a real DAC, then you can get a pretty good approximation of a sine. That, in turn, can be significantly improved with a bit of simple low-pass filtering that does not have to be critically tuned.

I'd dare say we'd be running out of grunt using dds to generate a reasonable 100kHz wave. Suggestions might be to use a faster cpu, dedicated dds chip or some filtering.

I suspect using square waves for FSK which then feeds an RF system is not a great choice.

Using a Sin wave would be much better.

This spectrum, from Wiki Square Wave, shows that a square wave has an infinite spectrum of harmonics.

Using two square waves will also generate additional spectral noise dues to the phase discontinuity when you switch back and forth between F1 and F2.

Using a DDS signal source both gives you a sin wave, and a smooth transition, phase wise, when you switch between the two frequencies.

Following the DDS you also need, as mentioned above, a LPF to remove the harmonics of the "stairsteps" generating the sin wave.

Here is the square wave spectrum: 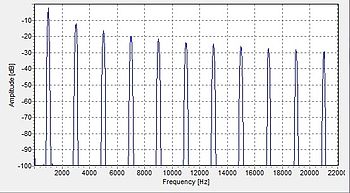 This image is a very crudely generated 40 kHz signal, using a DDS with only a relatively few "stair steps".

Passing the signal through a LPF retains the fundamental frequency and gives a decent appearing sin wave.

Having trouble uploading this image, will try putting it in its own post.

Analog devices, and others, have DDS chips.

An overclocked XmegaE5 would also work well for this.

to filter is not difficult, just I was surprise to see so much harmonic when it was very clean without FSK modulation.

the noise is not a reel problem but just want know what I missing ,

Harmonic is ok , normal spectrum from a square, but  F1 & F2 change value on the spectrum I have some problem to understand.

Testing to send only one carrier to control SW value and each frequency are right.

Then perhaps the incorrect frequencies are due to how and when the spectrum analyzer is sampling the signal, and not an actual error in the signal generation.

Along the lines of Kartman, you can have two moderate-q simple rlc circuits tuned for each freq. "ping" them with the micro (perhaps one output pinging both), or preferably use 2 micro output lines and ping one or the other for the fsk.  Combine the 2 tuned outputs with an opamp to form the single fsk output signal.

Since the difference is 1kHz i was expecting that the one tuned circuit would have enough Q for both frequencies. The old class C amp with tuned curcuit trick.

Surely 110kHz has harmonics at 330k, 550k, ...
And 114kHz has harmonics at 342k, 570k, ...
.
There will be other components during the switch phase. But most of the time, you have either F1 or F2.
Like Kartman, I would expect a bandpass or even a lowpass filter will round the edges of the signal.
.
Synchronising the frequency shift to happen at the completion of the current period. i.e. go from 4.05us half-cycle to 4.39us half-cycle
.
David.

I dare say one could use a dds technique to generate a lower frequency and use the class C amp/ tuned circuit technique to multiply the frequency by two or 3. Then you could choose from actual inductors and capacitors or gyrators with opamps.

You need big inductors for 110kHz. Active filters are probably smaller and cheaper.